I made a Morris chair. I didn’t take any pictures while I was making it but here are of few of the finished product: 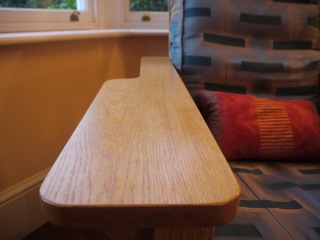 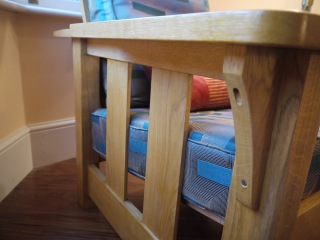 The wood came from English Woodlands Timber which should be a place of pilgrimage for any furniture maker or woodworker. I think I spent about £200 but I have a fair amount leftover so I reckon the wood for the chair was probably between £100 and £150. It comes rough sawn in big planks with the surface typically like this: 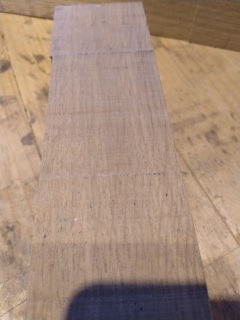 With only hand tools, preparing the wood took a lot of time but I did get a lot of planing and sawing practice. The wood is Croatian Oak and most of what I bought was prime and super prime which I think means it has no knots and is mostly straight grained. The thick pieces that I made the legs out of did have some funky grain which made for some interesting planing.

As you can see from the photos I made through-tenons on the side rails. This is in keeping with the Gustav Stickley versions you can find on the web and in various books. These proved quite hard to get neat. I cut all the mortises by hand with a chisel and mallet, and whilst I got them square to the surface the edges weren’t as perfect as I’d have liked and getting the tenons to fit took some time and patience. For most of the tenons I did the shoulder cross cuts with a small tenon saw and then split down the grain to get rid of most of the waste. I then used a router plane and a chisel to cut the cheeks square and to the right depth. The end result looks fine but I have to admit to using a little wax filer round those through-tenons.

The legs have a square tenon at the top that goes into the arm. On many versions of this chair that I’ve seen these tenons protrude through the arm. I chose not to do this firstly because of the issues cutting the other through tenons and secondly because I wanted the arms to be usable as mini tables and having the knob-end of a tenon sticking out was going to cause some spillage sooner or later.

The rail underneath the arms fits into a housing cut into the bottom of the arm. I tried to cut these using a plough plane and made a bit of a hash of it. It all looks fine so long as you don’t lie on the floor and look up (actually I just tried that and it looks OK).

The back frame is very simple. Two uprights are joined by five cross members using mortise and tenon joints. The key here was to make sure everything was square and flat to start with. I rounded the top and bottom of the vertical rails which gives some lovely end grain texture.

The 2 panels in each side are 9mm thick. I fabricated these by cutting thicker timber in 2 longways and then using a simple jig to plane them to a consistent thickness. I made the jig using bit of 9mm ply to rest the plane on hence the 9mm thickness of the panels.

See later posts on why this is really not necessary.

I carved the top of the pegs with chisels and a rasp and then drilled a hole in the middle to accept a dowel. I cut the dowels using a dowel cutter and an electric drill. Dowel cutter is like a big pencil sharpener. They needed a lot sanding but turned out pretty good in the end.

The arms are the best bit. If you’ve ever sat in a pub garden with a pint resting on the arm of an  Adirondack chair you’ll appreciate where I’m coming from. They are 195mm wide at the front so there plenty of room for a cup or glass, or indeed a dinner plate. My daughter likes to have her laptop on one arm and nice mug of tea or a G&T on the other. I just like to sit and feel the texture of the wood. I only gave them a light sanding so the finish is essentially what was cut with the plane and scraper.

The chair was finished with just a light sanding and several coats of shellac. Between each coat the surface was lightly sanded with 240 grit. To finish off the finish I added a coat of beeswax with fine wire wool and then buffed to a shine.

The seat base is a rectangular frame with webbing stretched and nailed across in both directions. The webbing, nails and the stretcher tool came from J A Milton. They also have some very useful videos on You Tube.

The cushions were made by a friend of my wife. The bottom cushion is a single piece of fire retardant foam with some soft cushioning on top. The back was originally also stuffed with a single piece of foam but this wasn’t very comfortable so my wife made a multi pocketed cushion which we stuffed with about 2kg of hollow fibre cushion filling. This is much better. The bottom cushion could also be improved perhaps with an interior sprung cushion ( a bit like a mattress).